President Vladimir Putin on Friday launched the first loading of liquefied natural gas at the Novatek-led Yamal LNG project in the Arctic, which will further expand Russia's global energy reach. 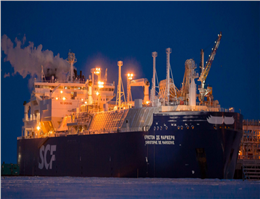 The Yamal project, which required investments of $27 billion, will allow Russia to fulfil a plan to double its share of the global LNG market by 2020 from around 4 percent now, MANA correspondent reported.
The LNG was loaded onto the ice class tanker "Christophe de Margerie", named after the former head of France's energy major Total, who died in a plane crash in Moscow in 2014. Total holds a 20 percent stake in Yamal LNG.
"The loadings will be carried out all year round... I am confident the second and the third parts of the project will be commissioned ahead of schedule," Putin said at a ceremony in the remote greenfield site in the heart of the Arctic tundra
"Russia can and should get a decent stake in the market," he told the attendees, who included Saudi Arabia's Energy Minister Khalid al-Falih.
Putin has in the past expressed his personal support for Yamal LNG, in which Novatek holds a 50.1 percent stake. Novatek is owned by Leonid Mikhelson, Russia's richest businessman with wealth estimated by Forbes at $18.4 billion.
Investments in the Yamal project were put at risk after Novatek came under Western sanctions over Moscow's role in the Ukraine crisis, but it managed to secure funding from Chinese and Russian banks, as well as from the Russian government.
Yamal LNG's loan deals with Chinese banks total more than $12 billion. It also secured Russian state funds worth 150 billion roubles ($2.5 billion) from a rainy day fund and 3.6 billion euros ($4.24 billion) from state-controlled Russian lenders Sberbank and Gazprombank.
More than 95 percent of future production from Yamal has already been pre-sold for the next 20 years or so, mostly to the Asia-Pacific region.
Yamal LNG is designed to be made up of four trains - three with an annual capacity of 5.5 million tonnes each and one train with a capacity of one million tonnes.
The second train is expected to be launched in the third quarter of 2018, the third train in the first quarter of 2019 and the fourth by the end of 2019.
0
Tags: Russia LNG
Visit Home
Send to friends
Print
Newsletter
Share this news