Tanker Shipping Benefits from Rise in US Crude Oil Exports 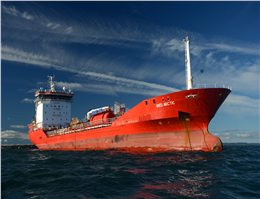 The development, which occurred less than two years after the US government lifted their restrictive policy on crude oil exports in December 2015, is due to US crude oil being exported twice the sailing distance of US oil products, MANA correspondent reported.
BIMCO informed that in October the seaborne exports of crude oil amounted to 46 billion tonne miles whereas the US export of oil products was equivalent to 43 billion tonne miles.
Despite the US seaborne exports of crude oil, being half the amount of seaborne oil product exports in October 2017 in terms of volume, it is now more important to the tanker shipping industry.
“The increased US crude oil exports during 2017 benefits the crude oil tanker shipping industry. The demand on that trade is up by 151% compared to last year. Not only are the volumes more than doubling, the sailing distances are increasing as well,” Peter Sand, BIMCO’s Chief Shipping Analyst, said.
“US crude oil exports are now more important to shipping than US oil product exports. Asia and Europe are the importers demanding most US crude oil in 2017. With Asia in particular being responsible for the longer sailing distances,” Sand added.
For the first 10 months of 2017, the US seaborne export of crude oil has increased 151% compared to same period last year. This amounts to an additional 20 million tonnes of crude oil being available to the shipping market, equivalent to 7.5 VLCC cargoes being exported more per month compared to last year.
While the average distance per exported tonne of US crude oil for the first 10 months of 2016 was 4,277 nautical miles, it has been 7,090 nautical miles for the same period in 2017.
China, being the main importer of US crude in 2017 is not only due to rising Chinese crude oil demand. China imported 55% from the Middle East in 2015, whilst importing 45% from the Middle East during the first 10 months of 2017.
0
Tags: tanker exports crude oil America 2017
Visit Home
Send to friends
Print
Newsletter
Share this news