Booming rates to ship iron and coal are giving grain traders a migraine. 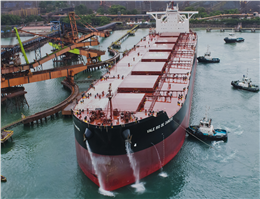 The cost of moving pretty much every dry-bulk commodity — from fertilizer to salt to rocks — has surged since July, lifting the London-based Baltic Exchange’s main freight gauge to its highest in almost four years, MANA correspondent reported.
The rally has been fired by China’s insatiable demand for coal and iron ore, more than tripling rates for giant Capesize ships that dominate both trades.
With the surge driving up shipping rate across the board, that’s bad news for agricultural traders already contending with the biggest supply gluts in years: they’re having to pay more to transport crops at a time when they can least afford it. 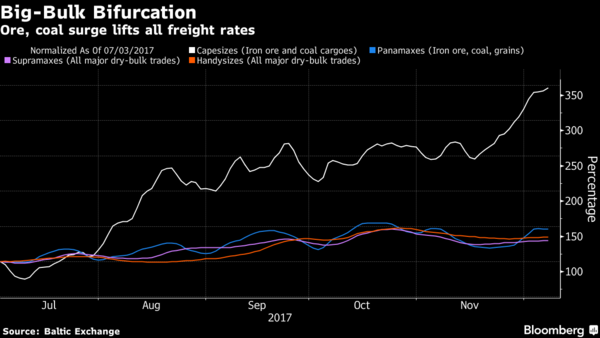 “Demand for Capesize vessels in the Pacific has been very brisk, partly due to China,” said Alexander Karavaytsev, an economist at the International Grains Council. There’s been a “spillover of demand” for smaller ships — so-called Panamaxes, Supramaxes and Handysizes that are also used for grains — because the availability of larger carriers is also restricted in the Atlantic Ocean, he said.
Commodity shipping markets, having gone through a nadir of their own, are now starting to rebound thanks to flows of iron ore and coal that will expand this year by the most in tonnage terms since 2014. That’s at a time when a fleet expansion has slowed dramatically.
Order books for dry-bulk shipping, tankers and container fleets are at very low levels by historic standards, Hartland Shipping Services said in a report, citing data from Clarkson Research. Order books for dry bulk stand at 8.2 percent of existing fleet. The last time it was below 10 percent was in October 2002, two years after which the industry had its biggest boom ever.
The Baltic Dry Index, an overall measure of the Baltic Exchange’s key dry-commodity routes, averaged 1,127 points so far in 2017, on course for its best year in four.
The surge has been led by China. Global trade in iron ore and coal will jump by 5.3 percent to a combined 2.69 billion metric tons of this year about half the cargoes heading to the Asian country, according to data from Clarkson Research Services Ltd., part of the world’s biggest shipbroker. With the fleet of Capesizes expanding by just 3.2 percent, that’s lifted vessel use — and rates — for all vessel classes, right down to smallest.
Agricultural traders are finding it harder to stomach the rising freight bill because prices for crops are being undermined by oversupply. World grain stockpiles for this season are forecast to rise for a fifth straight year to a record of about 726 million metric tons, according to the most recent data from the United Nations’ Food & Agriculture Organization. That surpasses last year’s record and is 7 million tons higher than the prior month’s forecast.
As far as the shipping market is concerned, agricultural trade is dwarfed by the heavy industry bulwarks. Grains and oilseeds make up less than 10 percent of all dry-bulk cargoes whereas coal and iron ore account for about half.
ABCD Pain
The oversupply of crops has helped push the Bloomberg Agriculture Subindex down about two-thirds from its peak set two decades ago. The measure is on course for its lowest annual average since at least 1991. Even agricultural giants, dominated by the “ABCD” quartet of Archer-Daniels-Midland Co., Bunge Ltd., Cargill Inc. and Louis Dreyfus Co., haven’t been immune.
At least 40 senior managers and executives in agriculture left their positions at trading houses such as ADM and Louis Dreyfus this year. ADM announced job cuts in July after disappointing earnings and a loss at its international trading operation. Bunge has announced a $250 million cost cutting program, while Louis Dreyfus and Cargill have sold assets amid challenging market conditions.
Freight isn’t helping their cause as it becomes a growing portion of exported cereal prices. This year, shipping costs will account for 11 percent of the average price on trades tracked by the International Grains Council. That’s the highest in seven years and compares with 8.5 percent in 2016. 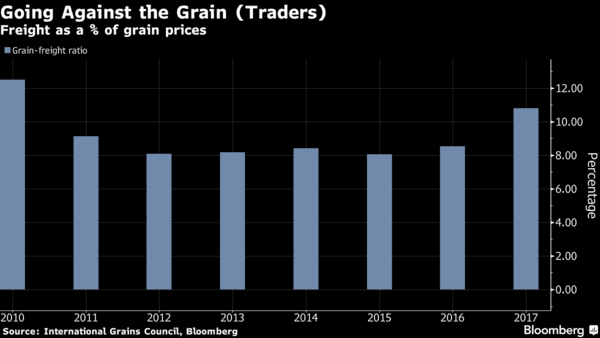 With exporters’ margins being negatively impacted, those located farther from their buyers will see their competitiveness wane, Rabobank International said in report.
“Some buyers are becoming more price sensitive and adapting by shifting their grain sourcing to origin countries offering cheaper transportation,” said Karavaytsev of the IGC.
Meanwhile things look relatively good for miners, who’ve mostly managed to pass on the higher freight bills to their customers. Global steel production rose to a record 145.3 million tons in October, according to the latest data from the World Steel Association, with almost half of it being made in China. Iron ore rallied back into a bull market last week as China’s curbs on pollution force buyers to chase high-grade ore from overseas.
Trickle Down
Shipments of the steelmaking raw material will total 317.6 million tons this quarter, the second busiest three-month period since at least the start of 2015, according to a forecast from Sanford C. Bernstein Ltd. On an annual basis, they’ll be a record, according to Clarkson.
While grain trade is up too, a surplus of cereals like wheat and corn means exporters can’t pass on the cost of freight in the same way as miners can.
“As Capesize rates hit new highs, there is going to be a trickle down effect on smaller size ships and an impact on grain shippers,” said Oscar Tjakra, senior analyst for grains and oilseeds at Rabobank in Singapore. “Margins of ABCDs are very low right now and they will have to compete by exporting to nearer destinations.”
0
Tags: china exports 2018 grain iron ore oversupply bloomberg coal
Visit Home
Send to friends
Print
Newsletter
Share this news