50 Years of Cooperation with IRISL Is an Honor

The managing director of Arkas Holding S.A. stated: relations between Iran and Turkey have long been defined by mutual respect. 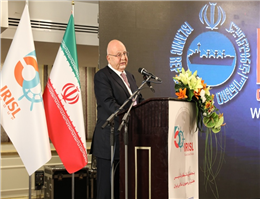 In the ceremony to honor the 50th anniversary of IRISL foundation, Bernard Arkas, the managing director of Arkas Holding S.A., pointed out that his company has a long history in Turkey and remarked: Islamic Republic of Iran Shipping Line and Arkas Holding S.A could have constructive cooperation in the fields of shipping industry and shipbuilding.
Referring to that there has been always very strong ties between Iran and Turkey, he continued: in the next year, we can witness a new round of mutual collaboration between the two countries.
In the end, Bernard Arkas asserted “ it is hoped that both companies will be more successful in 50 years ahead.
0
Tags: 50 Years of Cooperation with IRISL
Visit Home
Send to friends
Print
Newsletter
Share this news