We Will Build 50 Even More Glorious Years

The Chairman and CEO of Islamic Republic of Iran Shipping Line IRISL stated: we hope that by consultation and sharing thoughts, we can build 50 even more glorious years. 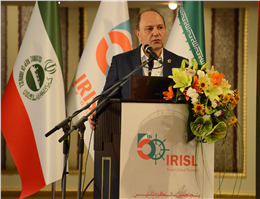 In the ceremony to honor the 50th anniversary of IRISL foundation, Dr. Mohammad Saeedi, the Chairman and CEO of IRISL extended his welcome to the foreign and domestic guests and expressed his hope that we can build the next 50 years even more gloriously, MANA correspondent reported.
He further stated: during 50 years of activity, we have gained a lot of precious and valuable experience, hence, we must make the best out of these experiences to hammer out a brighter future.
Referring to this fact that in the course of these years, IRISL has experienced a lot of ups and downs, Dr. Saeedi proposed that for the time being, IRISL is among the top-ten companies in the country and it is hoped that, he added, this company will thrive and flourish more than ever.
Emphasizing that Iran offers huge economic potential, IRISL CEO asserted this country provides appropriate investments opportunities for both international and domestic investors.
Moreover, in the first nine months of this year, IRISL has managed to transport 19 million tons of goods, he continued.
Announcing that IRISL has developed a practical plan for the next five- years, Saeedi added: based on this new plan, innovation and digitalization have been put into spotlight, since the world moves towards modern and cutting-edge technologies, this company will also keep up with these latest technology trends.
Emphasizing on the significance of multi-purpose transportation for carrying goods to CIS countries, Saeedi continued, we have developed a practical and strategic plan to connect Iran to different markets, particularly to those which will be created by launching of one belt-one road project, and this will also facilitate our access to European markets.
Chairman and CEO of IRISL put more emphasis on the importance of maritime industry and remarked: we must expand and develop shipbuilding industries, additionally, we must also support the investors who are providing sufficient investments in this industry.
With regards to the positive impacts of JCPOA implementation on the activities of IRISL, he stated: now, we have established new shipping lines in South Korea, Latin America , Europe and other countries worldwide.
Announcing that IRISL has put new round of cooperation with different countries on its agenda, Saeedi proposed that we are endeavoring to provide the best strategies for improving and enhancing cooperation with various countries.
Dr.Saeedi also remarked: in order to keep up with the global trend, we have to move toward digitalization, for this purpose, we have devised a long-term and strategic plan.
At the end, Dr, Mohammad Saeedi expressed his gratitude and apppreciation to the all former senior managers of IRISL.
0
Tags: Next 50 Years Even More Glorious IRISL
Visit Home
Send to friends
Print
Newsletter
Share this news