China and Greece have vowed to strengthen cooperation under the Belt and Road Initiative. This commitment was made during a visit to Athens by Chinese Vice Premier Ma Kai. 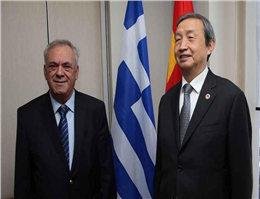 It came during talks Ma had with Greek Deputy Prime Minister Yiannis Dragasakis, last week, MANA correspondent reported.
Sino-Greek relations have witnessed steady and rapid development in recent years, especially in the areas of economic and investment cooperation.
Ma said China Cosco Shipping's concession to run Piraeus port “is a good example of win-win cooperation of the two countries”.
Ma noted both China and Greece are in key stages of reform and development, and the two countries should join hands to consolidate and further develop the momentum of cooperation in all fields.
He suggested the two sides should seize the historical opportunity of the development of the Belt and Road Initiative to step up all-round cooperation, promote practical cooperation through major projects, support cooperation between financial institutions in various ways, enhance balanced development by expanding trade and economic cooperation, and deepen people-to-people and cultural exchanges.
Dragasakis said Greece attaches great importance to the development of the relations with China, and actively supports the Belt and Road Initiative. He said Greece wishes “to make use of its status as a regional hub to strengthen cooperation under the initiative”.
The Belt and Road Initiative, championed by China, focuses on development of new road and maritime trade routes connecting a large swathe of Asia, Middle East, Europe and Africa.
0
Tags: china greece OBOR
Visit Home
Send to friends
Print
Newsletter
Share this news