A ceremony to honor the 50th anniversary of Islamic Republic of Iran Shipping Line foundation was held with the presence of prominent international and domestic figures. 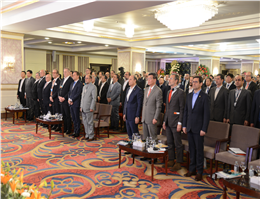 A ceremony to honor the 50th anniversary of IRISL foundation was held in Espinas Palace Hotel, MANA correspondent reported, a large number of activists in the fields of maritime, shipping and ports both at international and domestic level were also presented.
In this ceremony, Iranian Minister of Industry, Mine and Trade, Mohammad Shariatmadari pointed out that during half of century of activities, IRISL has made a significant contribution to improving Iran's economy.
0
Visit Home
Send to friends
Print
Newsletter
Share this news