Newbuilding contracting has risen from a low in 2016 to a slight rise this year, said DNVGL Greater China regional manager Torgeir Sterri at a press briefing on the sidelines of Marintec China. 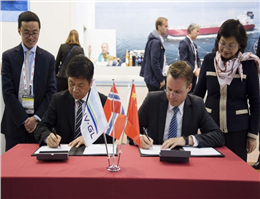 “We expect some potential in suezmax and aframax tankers and in the containers we can see as well that it remains quite low but there remains some potential on the feeder side and also some positive developments on the bulkers,” he said.
In addition, Sterri highlighted the fact that DNVGL believes the cruise, ferry and ro-ro segments remain strong at this point.
In terms of newbuilding contracting 256 vessels were contracted in 2016, while this year has been slightly better with 254 vessels contracted year-to-date, MANA correspondent reported.
However this still pales in comparison to almost 2,000 vessels a year contracted in 2005 to 2007 or so, Sterri acknowledged.
In China the most important segment for the class society in 2017 has been bulkers, tankers, container vessels and gas tankers he noted. This is a reasonable representation of larger market trends, with DNVGL-classed vessels comprising a market-leading 20% of the global classed fleet.
Turning to the maritime industry in China, Sterri said: “There is a big transition in the industry, there is no doubt about that, we all feel it every day,” he remarked. However Sterri also noted that China is adapting this new reality, with a stated aim of wanting to go into higher-end vessels.
“This works well with DNVGL because we also have the competence in these areas,” he pointed out.
However while ship building activity has slowed down in China, the Asian giant’s shipowners are coming up in the world, ranking just behind the Greeks and Japanese owners in contracting new ships. “I believe China is just starting and soon we will see China taking over these positions,” he said.
“China’s fleet will continue growing and there will be greater diversification in ship types,” Sterri believed.
“In summary basically 2017 has seen a slight improvement in ordering and further progress in 2018/19 is expected,” he concluded.
0
Tags: china norway DNV GL Shipbuilding fleet
Visit Home
Send to friends
Print
Newsletter
Share this news