Spanish authorities seized almost six tons of cocaine stashed in boxes on board a container carrier MV Banak while in the Port of Algeciras on November 28, the Spanish Interior Ministry said. 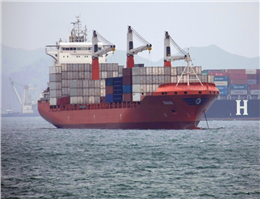 The 2014-built ship was carrying a shipment of bananas from Colombia to El Prat when the drugs were discovered.
The contraband was divided into blocks of 1 kilos of cocaine apiece, totaling in 5,883 kilos, and was well hidden inside containers containing shipments of bananas originating from Colombia, the ministry added.
The smuggled cocaine would have had the street value of EUR 210 million (USD 248.3 million).
Three persons have been arrested and two other people are being investigated in relation to the drug seizure.
According to the ministry, this is the biggest drug bust in the last 18 years and a record one involving a containership.
The Marshall Islands-flagged ship is listed as part of Torvald Klaveness’ owned fleet.
Klaveness told World Maritime News that the 2, 500 TEU containership is currently on time
charter to the French liner company CMA CGM.
“As the vessel’s charterer, it is CMA CGM who directs what containers are to be loaded or discharged at any time.
Klaveness has strict procedures for the handling of the containers carried, and all loaded containers have to be sealed prior to loading and until discharged.
“These procedures were also adhered to during the port call at Algeciras and Klaveness has not been notified of any irregularities. The only information we have at this stage is what is being reported in the press,” Lasse Kristoffersen, CEO of Torvald Klaveness, said.
0
Tags: CMA CGM spain france
Visit Home
Send to friends
Print
Newsletter
Share this news