Over 3.7 Million Containers Delivered in the First Ten Months

The Taicang port has processed more than 3.7 million containers and 213 million tons of cargoes in the first ten months of this year, witnessing an increase of 16.6 percent and 14.8 percent respectively, according to the head of the Taicang port. 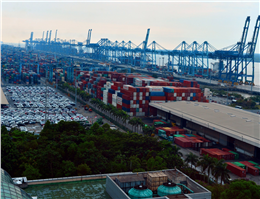 He also affirmed that the Taicang port is expected to deliver 4.5 million containers and load and unload 250 million tons of cargoes this year, MANA correspondent reported.
Taicang port has made several attempts in recent years to attract more business.
The port has accelerated its construction of terminals and as a result, five major working zones have come up, including containers, general cargoes, dry bulk, liquid chemicals, and equipment.
This year, Taicang port reached cooperation agreements with Shanghai and Ningbo ports, with which the two ports will transfer more supplies of goods to the port.
The port signed a development agreement with Switzerland-based Kuehne & Nagel, one of the largest freight forwarders in the world, stating that the ocean containers from South Jiangsu should be delivered from Taicang port to Yangshan port, Zhejiang province instead of being transported by rail.
It has also strengthened its cooperation with other ports along the Yangtze River, increased foreign trade routes, improved its shipping ability along the Yangtze River, and opened seven other inland waterways.
0
Tags: china Container Volume 2017
Visit Home
Send to friends
Print
Newsletter
Share this news