Capesize Rates to Climb in a 'Market on Fire'

Freight rates for large dry cargo ships on key Asian routes, which hit three-year highs this week, are likely to rise further on a shortage of ships available for immediate charter, brokers said. 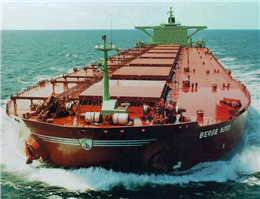 Rates for 180,000 deadweight tonne (DWT) capesize ships are set to break $10 a tonne from Australia to China in the next few days, while rates could also surpass $20 a tonne from Brazil to China, MANA correspondent reported.
"There are more chances of rates breaking $10 than $20 because the Australian market is more active among miners and vessel operators," a Singapore-based capesize broker said on Thursday.
The $10-a-tonne level was last breached in April 2014, and would be equivalent to earnings of $28,500 a day, while rates of $20 a tonne were last seen in November 2014, according to ship brokers and data on the Reuters Eikon terminal.
"Fortescue Metals was offering $9.50-$9.55 a tonne on Thursday. Roy Hill is likely to fix north of $10 a tonne," the broker said.
"It doesn't look like there will be any slowdown, particularly from Australia," the broker added.
Rio Tinto and FMG have both been active charterers this week, brokers said.
In the Brazilian market, vessel operators have been active while Vale has largely stayed away from spot charters this week.
"Weather delays in China and also significantly increased Brazil activity (are) adding fuel to a market segment on fire," Norwegian ship broker Fearnley said in a note.
Vale has focused on developing chartering relationships with a core group of shipowners through long-term charters.
South Korea owner Pan Ocean said on Thursday that it had won a 1.98 trillion won ($1.82 billion) contract from Vale to haul iron ore from Brazil to China for 27 years starting in 2020.
Pan Ocean said Vale will sign long-term contracts for 30 ships from seven South Korean and foreign ship owners.
"Happy days for the big ships with high and improving iron ore demand and prices in particular. Coal transaction volumes also higher than foreseen," Fearnley said in its note on Wednesday.
Capesize charter rates on the Western Australia-China route rose to $9.44 a tonne on Wednesday from $8.35 per tonne last week. Rates hit $9.51 a tonne on Tuesday, the highest since Nov. 11, 2014.
Freight rates from Brazil to China soared to $19.79 a tonne on Wednesday, the highest since Nov. 21, 2014, from $18.50 per tonne the same day last week.
Panamax rates for a north Pacific round trip voyage rose to $9,750 per day on Wednesday, the highest since Nov. 10 from $9,029 per day last week.
Rates in Asia for smaller supramax ships continued to rise with rates of $10,000-$11,000 per day from India to southeast Asia, and Singapore to Japan.
0
Tags: capesize charter rate Freight Rate Asia
Visit Home
Send to friends
Print
Newsletter
Share this news