Shipping Shipping
A
News ID: 77533 |
In the presence of Dr Rouhani; 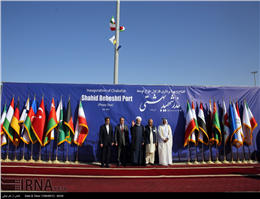 While inaugurating the plan, Dr Rouhani said: "We are very happy that the first phase of this development plan is being inaugurated in the Week of Unity".
After the ceremony, the President was briefed by the authorities in the construction process of the complex.
Chabahar's Shahid Beheshti Port is one of the largest development projects that has been able to increase the capacity of the port from 2.5 million tonnes to 8.5 million tonnes.
In the first phase of the port of Shahid Beheshti, 15 million cubic meters of dredging, 203 hectares of new land, and 1,650 breakwaters have been constructed, and its basin depth is 16.5 square meters.
Currently, 100,000-ton ships are capable of mooring, and this can play a significant role in the import and export of basic goods.
The next four phases of Shahid Beheshti Port will be completed and put into operation, which will eventually reach 82 million tonnes.
A total of $1 billion has been spent on preparing and equipping the first phase of Chabahar's Shahid Beheshti Port.
Chabahar Port is an interconnector between South-East Asia, Central Asia and Afghanistan. The development of Chabahar Port is a driving force for the country's economic development, especially the South East, and port operations can create added value and .employment in the south-east of Iran
0
Visit Home
Send to friends
Print
Newsletter
Share this news