SUPRAMAX bulker earnings are expected to hold firm and even climb next week, despite pressure from the upcoming Golden Week holidays in China. 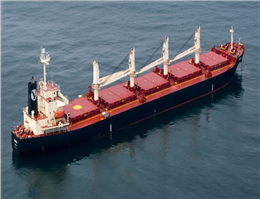 According to MANA, After last week’s soaring rates, market participants expect earnings to cross the $12,000 per day mark as tonnage lists remain tight and with a fair amount of interest seen in the market.
On Tuesday, average earnings reached the $11,931 per day mark on the Baltic Exchange, up 4.1% over the week, while the related index was assessed at 1065 points, the highest since the new index was introduced in April this year.
The biggest increase was witnessed on the S9 route, West Africa trip via east coast South America to Skaw-Passero, which registered a 12.4% rise to $11,229 per day.
The rest of the benchmark routes saw fair gains, but rates on the Canakkale trip via Mediterranean or Black Sea to China-South Korea, S1B route, fell 4.3% to close at $16,969 a day, due to the decline in grain and scrap shipments from the region.
Freight rates for geared vessels are climbing on demand for grain shipments from the US Gulf and east coast South America. While in the Pacific region, strength in the market was a result of coal flows from Indonesia to China as well as India which soaked up a number of vessels available on spot.
Meanwhile, typhoons in the Pacific appear set to make an impact, with the giant tropical storms limiting vessel supply and boosting rates.
Norwegian brokerage Fearnleys noted in its weekly report that charterers in Asia suffered due to lack of open tonnage within the region, which tightened further due to the typhoons which hit the South China sea and Vietnam.
“As we are seeing fairly balanced levels of both tonnage and cargoes, the market should remain looking healthy well into next week,” said Braemar ACM in its market report.
Around 24 spot fixtures were reported as compared with 26 in the previous week, Clarksons data showed. The fixtures were concluded for coal from Indonesia to China at $14,000 per day, and nickel from Philippines to China at $12,500 per day.
A 56,700-dwt 2013-built was fixed for a trip from Fujairah to India at $15,000 per day.
Two period fixtures were also reported in the past week — at $11,500 per day for one four to seven months and at $13,000 per day for five to seven months, according to broker reports.
In the sales and purchase market, Scorpio Bulkers bought six ultramax dry bulk carriers from Golden Ocean Group at $142.5m.
0
Visit Home
Send to friends
Print
Newsletter
Share this news