EARNINGS for handysize bulkers reached their highest level in three years and five months thanks to continued demand from the east coast of South America combined with reduced vessel supply in the Pacific. 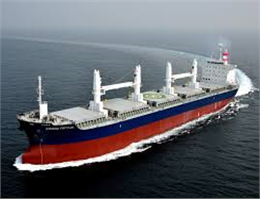 According to MANA, after gains for four consecutive weeks, the average weighted time charter on the Baltic Exchange reached $8,784 per day at the close on Friday, the highest since April 2014 and up 10.9% on week.
The Baltic Exchange Handysize Index, meanwhile, jumped by 11.2% week on week to settle at 596 points.
According to the weekly round-up by Ocean Freight Exchange, steady grain and alumina movements in Southeast Asia supported the handysize market, while a lot of activity was noted out of New Zealand.
In addition, brokerage Gulf Maritime noted that the regular shipments from the US Gulf restarted after several days of rough weather conditions, which provided a boost to freight rates in the Atlantic.
The general tonnage situation for handysize bulkers remained so tight in the Atlantic that most of the vessels that had been open in the Pacific were seen ballasting to the region.
However, amid the rosy picture for demand, the biggest concern still remains the supply side equations.
The global handysize fleet increased by four vessels totalling 190,000 dwt during the month of August, while in the year so far it has increased by 25 vessels with 1.4m dwt, amounting to an on-year gain of 1.01%, Allied Shipping Research data shows.
During this past month, seven newbuildings were delivered, while at the same time just three vessels were scrapped.
The orderbook now stands at 165 vessels with 6m dwt.
In the spot market, nine trades were reported in the past seven days, according to Clarksons.
In the Atlantic, a 2014-built, 39,000 dwt ship was fixed to carry fertiliser from Antwerp to the east coast of South America at $9,000 per day whereas the Pacific saw a 24,000 dwt vessel, delivery in mid-China, being paid a rate in the mid-$9,000s daily for a trip to the Middle East Gulf.
For the period charter market, Clarksons reported a 2009-built, 28,442 dwt handysize being fixed for five to seven months at $8,000 per day.
0
Tags: Handysize earnings hit highest level
Visit Home
Send to friends
Print
Newsletter
Share this news