An Opportunity to Gain Profit

We should call the 20th century, the century of industrialization; a century that for every industrial progress, human’s life proceeded towards more well-being so much so that the meaning of industry development was equal to welfare. The man of the 20th century who witnessed two devastating wars in order to achieve a better life and more organized one went more and more towards using the element that is his handmade. 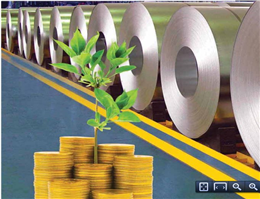 This element was the human invention and considered as the achievement of human life. Although, this excessive use of ability to create a better society caused human being to move toward unreasonable exploitation of nature more than ever, what would satisfy the man of the 20th century, especially after the World Wars, was the relaxation following funny economics. As already mentioned, the driving and well-being engine of prosperity was searched in the industry and its artifacts. Meanwhile, the result of this prosperity was nothing but an increase in the economy that was the only demand of human being.
Accordingly, the countries stepped toward industrialization, namely modernization based on their power and share of the world economy. With the arrival of the new century, the paradigm of well-being and welfare in the lives of human beings is still defined from the view point of development, especially by means of industry. However, this time, the industry also took on a new meaning. While in the past the term “industry” only applied to the construction of machinery and oil as well as transportation industry, this time it is not only the hardware of the industry but also software production which was changed the norm of human life. Change in the norm of human life and the different approaches caused growth to be equal to the increase in industry; however, this industry had a much wider meaning. The industry vast extent means the more possibility to share knowledge and the ability of the rest of the world to progress. Therefore, although industrialization and the Industrial Revolution was a whole West meaning, in the early days of the new century, the rest of the world has also reached some achievements in this issue that it must be admitted to be one of the most important causes of this proposition, if not saying that it was central to construct the concept of “globalization”. Southeast Asian countries that have focused on the new artifacts which were no longer only hardware-based, have gently adapted themselves and could introduce themselves to the world. However, one issue was quite necessary for all these countries besides their Western competitors, which was the raw material! The necessity of raw materials for economic and industrial development is important to the extent that we shall understand that the countries which are the owner of materials have a special significance in the geopolitical map of the world. Therefore, if a country would like to have such an important position, it must own both the raw material and industrial power at the same time. Iran as the world’s largest owner of oil and gas reserves and one of the biggest countries with the mining industry, owns one of the important elements of the proposition, however, few people thought that it could move towards industrialization due to being located in a region that was constantly colonized over the past century. But the differences between Iran and elsewhere in the region were in one principle, namely the extent of the world and the population numbers. Since the mid-twentieth century, Iran with the participation of foreign companies moved towards creating some platforms for the industry. One of the most crucial industries that could enter Iran in the club of industrialized nations of equipment was the construction of the steel plant.
Accordingly and with steel production, Iran more than ever was in a position to create a platform for the use of steel artifacts, so, in the mid-40s of solar calendar it launched one of the world’s largest automobile production line with the cooperation of English engineers. But this is not the whole story of Iran’s industry. Considering the huge oil and gas reserves, this country discovered the necessity to create a value chain and its consequence was the construction of the petrochemical complex in Iran which has spread almost throughout the country. Moreover, it included a significant volume of industrial production and exports of Iran. As already mentioned, the new century was another century, and the meaning of industrialization also meant something else. Hence, Iran having an acceptable position at the global balance in terms of engineering growth has also entered in the field of IT and ICT at least to take steps in supplying the domestic needs. Maybe this is a new industry in Iran; however, its growing trend over the last two years has created an astonishing added value of $ 14.5 billion in the previous year, promising the emergence of a new pole in this section. But what is important for any development is the infrastructure and financing and the requirements of these two are defined in constructive engagement.
When at the beginning of January 2015, JCPOA shone on the relationship between Iran and the world, the investors once again acknowledged the special position of Iran. Creating proper grounds and the attraction of some industries and mines led the countries of the world move toward cooperation in order to gain profit. We could see the result in several important contracts with Western car makers, including Peugeot Citroen, Renault, and Mercedes. Moreover, another achievement for both developing the relationship and advancing industry is the creation of a joint factory with Peugeot with the purpose of export. In addition, after many years, the   petrochemical production reaches the staggering number of more than 55 million tons as a result of the creation of appropriate platforms for the petrochemical industry that is remarkable by itself and this is one of the greatest achievements of Iran in the field of investment. If we put these propositions together, due to having huge reserves of minerals as well as stability and security, we can acknowledge that Iran could transform itself to be a wellrespected country at industrial level by the efficient use of economic diplomacy and development of the infrastructure. Everybody knows that the meaning of this feature is opportunity and opportunity equals profit.
0
Visit Home
Send to friends
Print
Newsletter
Share this news