CMA CGM recorded a net income of $219 million on revenues of $5.55 billion for the second quarter of 2017, with volumes rising 33.3 percent year-over-year. Volumes carried grew with the integration of APL, the launch of OCEAN ALLIANCE and the industry dynamism, the company said. 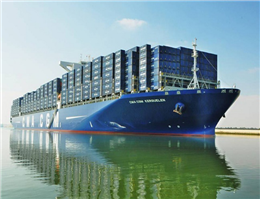 The French ocean carrier said its net income is $219 million for the second quarter of 2017, compared to a net loss of $129 million for last year’s second quarter, MANA correspondent reported.
The increase in freight rates on most of the Group's lines led to a significant 12.5% increase in average revenues per container in the second quarter of 2017. The Group’s consolidated revenues hence strongly increased by +56.8% in comparison with Q2 2016, to reach 5.55 billion USD.
CMA CGM is once again positioning itself as the best performing player in the global container shipping market in terms of core EBIT margin, as in Q1 2017.
Rodolphe Saadé, the CEO of CMA CGM Group, stated: "The Group releases excellent financial results for the 2nd quarter, with a core EBIT margin sharply rising thanks to our strategy of profitable growth. Once again, CMA CGM outperforms the industry and demonstrates the excellence of its operational management as well as the relevance of its strategy."
"During the quarter, we also continued to support the group’s growth with the planned acquisition of Mercosul, opening up the Brazilian domestic market. The Group is also preparing for the future with the order of 9 container ships of 22,000 TEUs which will enable us to continue our development and maintain our competitiveness,” he added.
On April 1st 2017, the largest operational shipping alliance, OCEAN ALLIANCE went live. With more than 40 maritime services, this operational alliance was very well received by customers, thanks to the port coverage and transit times offered.
On April 26, 2017, CMA CGM and Adani signed a joint venture agreement to jointly operate the new container terminal at the port of Mundra.
On June 12, 2017, CMA CGM and Maersk Line announced that they have signed a binding agreement whereby CMA CGM would acquire Mercosul Line (Mercosul), one of the leading players in Brazil’s domestic container shipping market.
The acquisition of Mercosul will allow CMA CGM to strengthen its service offering to and from South America, most notably in Brazil, especially on cabotage and “door-to-door” services. This proposed acquisition of Mercosul is accompanied by a new service offering between South America, Northern Europe and the Mediterranean.
0
Tags: CMA CGM revenue france 2017
Visit Home
Send to friends
Print
Newsletter
Share this news