GDP GREW BY £4.80 FOR EACH £1 THAT GOVERNMENT SPENT ON MARITIME TRAINING. UK government subsidies for maritime training yield an almost fivefold return to the country’s gross domestic product, according to a new report that calls for an increase in government spending. 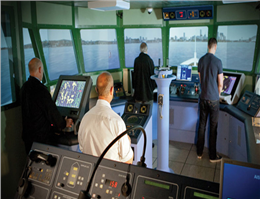 Will the UK government use London Shipping Week to announce new funding for seafarer training?
LAST WORD IS KEEPING ITS EARS PEELED FOR NEWS OF A SEAFARER TRAINING FUNDING BOOST.
LONDON International Shipping Week is upon us and the question on many people’s lips is: will the government use this opportunity to announce new funding for seafarer training?
The UK Chamber of Shipping, Merchant Navy Training Board and trade union Nautilus International have led a hard fought campaign for Smart+ funding to be doubled from £15m per year to £30m.
In its current form Smart contributes to around 30% of the cost of training officer cadets to the first certificate of competence.
An independent report on Smart commissioned by the Department for Transport found that for every for every £1 ($1.30) the government spends on there is a whopping £4.80 return to the UK gross domestic product.
The Chamber was hoping for an announcement of the extra investment back in February, but was disappointed due to the unexpected general election. But perhaps it’s time has come?
Speaking with Last Word on the cusp of LISW, Minister of State at the Department for Transport John Hayes said he was absolutely dedicated to training, and a great champion of practical vocational and technical skills. Being an ex-skills minister it would no doubt be something of a personal coup for Mr Hammond should the funding come through. We will keep our ears peeled for the big news.
This London International Shipping Week, join Lloyd’s List and industry leaders, from fuel suppliers to financial institutions and legal practitioners, to discuss strategies needed to avoid risk pitfalls.
UK maritime training investment yields almost 380% GDP return
GDP GREW BY £4.80 FOR EACH £1 THAT GOVERNMENT SPENT ON MARITIME TRAINING.
UK government subsidies for maritime training yield an almost fivefold return to the country’s gross domestic product, according to a new report that calls for an increase in government spending.
Much of the UK maritime sector has been affected by the 2015 Maritime Growth Study, a government study that put forward a set of recommended changes the country’s sector should adopt to revamp and become more competitive.
Support for Maritime Training (Smart), a UK-government funded programme for partially subsidising the training of officers, officer cadets and ratings under the purview of the Maritime and Coastguard Agency, is one of the UK maritime sector's stronger aspects, according to an independent report on Smart commissioned by the Department for Transport.
The report found that for every for every £1 ($1.30) the government spends on Smart, which contributes to around 30% of the cost of training officer cadets to the first certificate of competence and accounts for the majority of Smart funding, there is a £4.80 return to the UK gross domestic product.
However, the government’s spending share has declined from around just under 50% at Smart’s inception to around 30% today, with the 2015 budget standing at £15m and the weighted average cost of training a cadet in the UK at £59,150.
Simultaneously with this declining contribution, the number of trainees has also decreased. As training numbers slide and tuition fees increase, the government needs to step up spending on the programme to grow or at least maintain the same number of trainees, the report argued, elevating this recommendation as the most important one of all.
“Without increased levels of government intervention, the UK seafarer population will continue to decline. If this trend continues, it will be detrimental to the economy and defence interests of the UK. Therefore, the authors support increasing the number of seafarers in the UK,” the report said.
The review further said that the Seafarer Projections Review found that based on demand supply dynamics in the UK shipping industry, the number of newly qualified deck and engineering officers joining the industry each year needed to increase from the current 645 to between 1,500 and 1,600.
“This is currently more than double the number of officers that qualify through UK funded training scheme, highlighting an opportunity for UK employment,” it said.
Abolishing Smart altogether would be a mistake, the report said, ultimately resulting in a fall in cadet numbers from the current approximately 850 to anywhere between 680 and 425.
0
Visit Home
Send to friends
Print
Newsletter
Share this news