THE panamax bulker segment entered the current week strongly compared with the other dry bulk segments, with rates popping up in the Atlantic as well as the Pacific region. 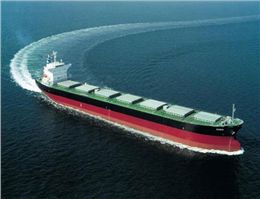 According to MANA, although vessels are being delayed following Hurricane Irma and two typhoons in the Pacific, rates in the Atlantic were on the rise as steady east coast South America grain activity was reported, coupled with fresh cargoes from the US Gulf, Braemar ACM said in its weekly note.
In the Pacific, Australian round voyages saw a healthy amount of cargo, with fixing levels at mid-$12,000 per day and charterers paying up to $13,000 per day for shipments from Indonesia to China, the brokerage added.
“There has been a generous level of inquiries, along with a constricted supply of tonnage which has helped freight rates considerably,” said a Singapore-based broker.
The Baltic Exchange Panamax Index rose significantly during the past week, reaching 1,429 points on Tuesday from 1,275 points a week earlier, up 12.1% week-on-week.
Moving in tandem, the average weighted time charter rate jumped to $11,477 per day from $10,230 per day a week earlier. The latest assessment is the highest since end-April this year.
The sustained growth in grain shipments especially from east coast South America is the driving force for panamaxes so far this year.
Spot activity in the panamax segment saw rates of $22,000 per day being fixed from West Africa to China, while a cargo of bauxite from Brazil to China was fixed at $20,000 per day, according to Clarksons.
Thirty-two trades were reported as concluded in the past seven days, with a number of fixtures for Australia to India and Indonesia to Japan, Clarksons data showed.
Period rates also increased as the forward freight assessment values supported higher levels and positive sentiment pushed into that area as well.
Around six deals were concluded over the past week with the 2014-built, 81,922 dwt Atrotos Heracles being fixed for six to eight months at $13,250 a day.
Secondhand prices continued recent uptrends, with VesselsValue reporting a 2006-built, 83,000 dwt ship sold for $14.5m and a 2007-built, 76,600 dwt ship at $13.7m, with both ships constructed in Japan.
In the demolition market, Vietnam-based Vinalines sold its 1997-built panamax to a Bangladeshi yard at $394 per ldt, VesselsValue data showed.
0
Tags: Panamax Earnings soar
Visit Home
Send to friends
Print
Newsletter
Share this news