AVERAGE panamax bulker earnings have risen back above $10,000 per day on the Baltic Exchange following the end to the Hurricane Harvey debacle, which had halted grain loadings from Texas ports. According to MANA, according to Braemar ACM, steady grain exports from the US Gulf coast and the eastern coast of South America “kept the Atlantic busy” while in the Pacific, healthy volumes of cargo were also seen being fixed, particularly from Indonesia to China.
The average weighted time charter on the Baltic Exchange rose 10% to $10,546 per day at the close on Wednesday, while the index climbed 119 points on the week to 1,314 points.
Arrow Research said grain exports from the US should “pick up strongly” in the coming weeks as generally volumes begin rising in September, gain a month later, peak in November, and then drop off at the end of the year.
Citing figures from the US Department of Agriculture, Arrow pointed out that grain exports from the US in the 2017/2018 season were expected to grow by 3.6% compared with the previous year due to strong demand, a development that should help panamax demand.
The spot market was lively, with 33 fixtures in the week, according to Clarksons. The highest trade was concluded at $16,750 per day from the eastern coast of South America to the Skaw-Gibraltar range, while shipments to Southeast Asia were fixed at $13,250 per day. Meanwhile, a load to Iran was booked at $13,000 per day.
An Indonesia to India trade was seen at $9,000 per day, while one from the eastern coast of Australia to China was concluded at $10,750 per day, Clarksons data showed.
Two period charters were fixed at rates higher than in the previous week, according to Clarksons. They were concluded at $12,500 per day for four to seven months and at $11,500 per day for six to eight months, respectively.
Newbuilding demand reportedly emerged in the past week, with 10 82,000 dwt bulkers being contracted by Japan’s Nissen Kaiun, according to VesselsValue, for $27m each and due for delivery in 2020. The price tag is $3m cheaper than an order for four 80,000 dwt carriers placed a few days earlier, according to the online data provider. 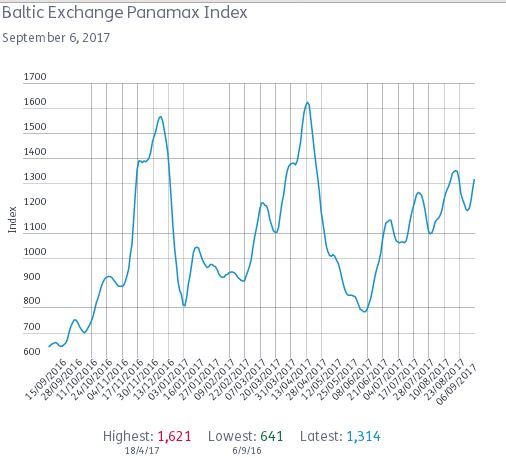