Qingshan Shipyard, a subsidiary of state-owned Sinotrans & CSC with more than 60 years of history, has confirmed a plan to cease its core shipbuilding business due to the protracted industry recession, reports said. 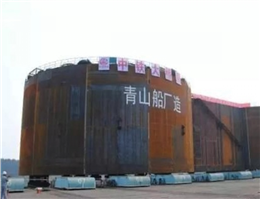 The decision was taken in view of a dearth of new orders at the shipyard, and also partly due to a strategic reorganisation of the group following the merger of its parent Sinotrans & CSC with China Merchants Group, MANA correspondent reported.
After it quits the shipbuilding business, Qingshan Shipyard will turn its focus on becoming a container distribution centre, tapping on its strength in the steel structure business, the local media reported.
Since the beginning of 2015, Qingshan Shipyard has taken the initiative to build up its competency as a steel company. The company has become the first in Hubei province to manufacture a steel wind power tower.
During its heyday, Qingshan Shipyard was ranked number one in China and number seven worldwide in chemical tankers orderbook, according to a 2006 Clarksons report.
At present, Qingshan Shipyard holds the status of being a ‘white list’ yard, a Beijing-formulated policy to encourage local banks to prioritise their lendings to these yards.
This year to-date, Qingshan Shipyard has delivered eight vessels with a remaining three under construction, including a pair of 64,000 dwt bulk carriers. The shipbuilding business will officially cease once the last three vessels are delivered.
0
Tags: china Shipbuilding 2017 White List
Visit Home
Send to friends
Print
Newsletter
Share this news