As the demand for search and rescue resources diminishes, maritime business is getting underway again in Texas after Tropical Storm Harvey. 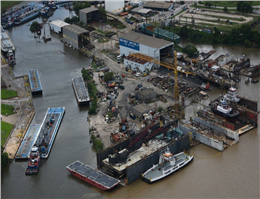 Offshore oil and gas operators in the Gulf of Mexico are re-boarding platforms and rigs and beginning to restore normal operations, MANA correspondent reported.
The Bureau of Safety and Environmental Enforcement (BSEE) Hurricane Response Team continues to monitor the operators’ activities and to date, no damage reports have been received.
As of Sunday, personnel remain evacuated from 30 production platforms, which represents 4.07 percent of the 737 manned platforms in the Gulf of Mexico. Personnel have returned to all five of the previously evacuated rigs. None of the 21 DP rigs currently operating in the Gulf moved off location out of the storm’s path.
BSEE estimates that approximately 5.5 percent of the current oil production of 1,750,000 barrels of oil per day in the Gulf remains shut-in, which equates to 96,260 barrels of oil per day. BSEE also estimates that about 8.43 percent of the natural gas production of 3,220 million cubic feet per day, or 271.39 million cubic feet per day, remains shut-in.
Ports and Waterways
Many ports and waterways are now open including The Galveston Bay Entrance Channel, Outer Bar Channel, Inner Bar Channel, Bolivar Roads Anchorages, Bolivar Roads Channel and Galveston harbor. The Port of Freeport is open in daylight but only for vessels with a maximum 38-foot draft. The Galveston Harbor and Texas City is open but only for vessels with a maximum 37-foot draft.
The Houston Ship Channel is open from the entrance channel to Baytown Highlands, but only for vessels with a maximum 40-foot draft. The Houston Ship Channel above the Baytown Highlands is open to towing vessels transits.
Cruise Ships Dock
The Carnival Breeze has now docked at the Port of Galveston, the last of four cruise ships to do so after spending an extra week at sea. The ships were turned away on August 25 as Harvey strengthened from a tropical storm to a hurricane - leaving around 20,000 passengers stranded at sea.
0
Tags: Houston Ship Channel harvey
Visit Home
Send to friends
Print
Newsletter
Share this news