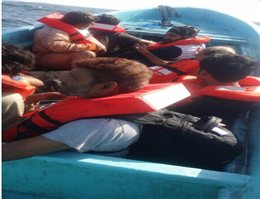 The report quoted Authorities in Oman saying that the ship was loaded with construction material, consisting of steel bars and sand.
Police and Oman’s Transportation and Communications Ministry said that the boat sank off the coast of Lakabi, a town some 620 kilometers (385 miles) southwest of the sultanate’s capital, Muscat.
The 20 sailors, who were of various nationalities, were rescued and brought to the nearby police hospital in Lakabi. A nearby fisherman saved the sailors.
The ministry said the Tanzanian-flagged ship was heading from the United Arab Emirates to Eritrea in East Africa.
0
Tags: oman sink cargo ship
Visit Home
Send to friends
Print
Newsletter
Share this news