Niche container carrier Wan Hai Lines was the most reliable in Q2 as overall reliability for the sector improved according to analysts SeaIntel. 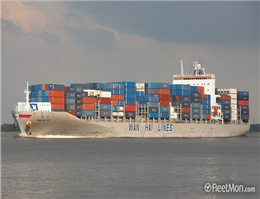 SeaIntel said that global schedule reliability for the top 18 container shipping lines improved by 2.3% in Q2 to 74.6% compared to 72.3% in Q1. However, year-on-year reliability sank some 10.4% from 85% schedule reliability recorded in Q2 2016, reported by MANA correspondent.
Top for reliability in Q2 2017 was Wan Hai with 79.7% followed by another niche player Hamburg Sud 78.6%. They were followed by MSC and Evergreen with 77.4% and 77.0%, respectively.
Propping up the bottom of the table was Wan Hai intra-Asia rival and sometime partner Pacific International Lines (PIL) with 70.3% schedule reliability. The Singapore-headquartered line also saw the largest drop in schedule reliability year-on-year with a fall of 13.8%.
SeaIntel said on-time performance was based on 38,995 distinct vessels arrivals.
0
Tags: wan hai Wan Hai Lines container line 2017 Taiwan
Visit Home
Send to friends
Print
Newsletter
Share this news