China has successfully produced natural gas from methane hydrate, also known as "flammable ice", in an experimental project in the South China Sea, the land and resources ministry 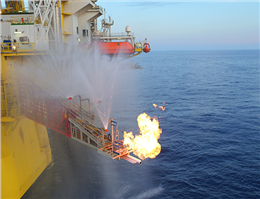 According to MANA, A drilling platform deployed off the coast of the southeastern Chinese city of Zhuhai for 60 days produced a total of 309,000 cubic metres of natural gas, a record extraction volume from gas hydrate, the Ministry of Land and Resources said in a notice on its website (www.mlr.gov.cn).
"After nearly 20 years of unremitting efforts, China has achieved theoretical, technological, engineering and equipment innovations and has made a historical breakthrough," the ministry said.
Flammable ice consists of methane trapped within water crystals, and has been identified as a potential new gas source for China, with the South China Sea thought to contain some of the world's most promising deposits.
The government has promised to "actively develop" natural gas hydrate over the 2016-2020 five-year plan period.
The land and resources ministry said earlier this year that two gas hydrate deposits with about 100 billion cubic metres of reserves have been discovered following seismic surveys and drilling programmes in the northern section of the South China Sea.
Japan reported a similar successful production test in May. India, Canada and the United States are also believed to be looking at hydrates as an alternative energy source.
0
Tags: china gas
Visit Home
Send to friends
Print
Newsletter
Share this news