Samsung Heavy to Wind Up Ops at Another Dock

South Korean shipbuilder Samsung Heavy Industries is looking to shut down another one of its floating docks on the back of a drop in new orders, Yonhap News Agency cited undisclosed industry sources. 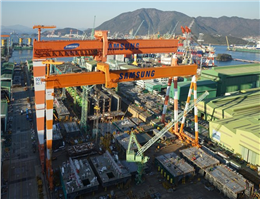 The shipbuilder, which operates eight docks, including four floating docks, reportedly closed one of its three on-road docks last month and is planning to stop operations at another one later this month, MANA correspondent reported.
Samsung Heavy started shutting down its production facilities in an effort to make up for the shortage in newbuilding orders.
Earlier in July, the shipbuilder was cited as saying that it plans to further cut its workforce, continuing with the move announced in its self-rescue plan in mid-2016.
A total of 5,000 jobs are expected to be cut by 2018, of which it already slashed 1,500 during 2016 through an early retirement scheme. The company is also looking to have its employees return part of their salaries in an effort to cut costs.
In the first six months of 2017 the shipbuilder managed to score USD 4.8 billion worth of orders to construct 13 vessels, including two offshore plants.
SHI expects to end the year with some USD 6.2 billion worth of orders, slightly less than its 2017 goal of USD 6.5 billion.
0
Tags: dock 2017 Samsung Shipyard south korea workforce
Visit Home
Send to friends
Print
Newsletter
Share this news