Monaco-based bulker owner and operator Scorpio Bulkers resumed its recovery streak from the first quarter slashing its half-year net loss to USD 48 million in 2017 from a net loss of USD 83 million reported for the six months ended June 30, 2016. 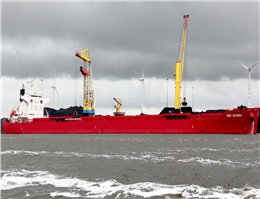 According to MANA,Time Charter Equivalent (TCE) revenue was USD 72.2 million in the first half of 2017, Scorpio said, with TCE revenue per day of USD 8,673 for the first half of 2017, almost doubling from last year’s USD 4,396.
“TCE revenue increased significantly versus the prior year due to the increase in rates, attributable to increased worldwide demand across all bulk sectors, regions, and commodities, as well as a reduction in supply as fewer vessels are now on order, combined with the increase in revenue days associated with the growth of our fleet,” the company explained.
For the second quarter of 2017 the company’s GAAP net loss was USD 13.4 million, also down year-on-year when compared to last year’s USD 24.7 million net loss.
Scorpio said that it has agreed with lenders in July 2017 to reinstate the deferred debt repayments on its USD 45.4 million debt facility.
0
Visit Home
Send to friends
Print
Newsletter
Share this news