The Islamic Republic of Iran Shipping Line became an official member of China International Chamber of Commerce for the Private Sector (CICCPS). 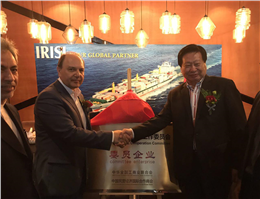 MANA correspondent reported that IRISL’s membership at CICCPS was officially maintained in the meeting of IRISL director and his accompanying delegation with CICCPS’ secretary general.
IRISL director and head of the board, Dr. Mohammad Saeedi, visited the headquarters of CICCPS in Shanghai, and sat with CICCPS secretary general, Wang Yanguo. In the course of this meeting, Dr. Saeedi stressed the importance of strengthening the mutual ties and expanding technical collaborations between the two parties.
The CICCPS, which has been officially recognized by China’s Ministry of Construction, is the first technical special chamber to offer services to Chinese private corporations, and its main objective is to facilitate economic collaborations between Chinese international companies and the international companies of other nations. Offering financial, legal, international security, and high tech services as well as establishing strong ties with Belt and Road Initiative (BRI) countries are among the top priorities of CICCPS.
The CICCPS, as the only institution under the federation of Industry and Commerce, has established its ties with the Chinese government, and operates under direct management and supervision of The National Development and Reform Commission of the People's Republic of China (NDRC) and Ministry of Commerce (MOFCOM). CICCPS is the only institution that is deemed as the product of NDRC and MOFCOM.
0
Tags: IRISL member CICCPS
Visit Home
Send to friends
Print
Newsletter
Share this news