The Greek shipping community is confident that Greece can be a maritime center in near term, said a research report. 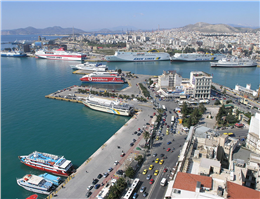 A study -‘repositioning Greece as a global maritime capital' - conducted by Ernest & Young in cooperation with Aegean University professor Thanos Pallis said that Greece, especially the port of Piraeus, is viewed as future competitors of Asia’s aggressive shipping hubs in the coming decade, MANA correspondent reported.
The study gauging the views and forecasts of 779 Greek shipping executives revealed that the most attractive and comprehensive framework among shipping hubs or “clusters” today is Piraeus, Greece’s biggest port.
The executives believe that its enhancement would strengthen their business – in spite of the the growing attractiveness of competing maritime centers.
The second choice was Singapore, followed by Dubai and London. The three aforementioned metropolises, in fact, were cited as Piraeus’ biggest competitors.
The study pointed out that Athens-Piraeus maritime center is important primarily due to the importance of its port as a gateway to Southeast Europe and the prospects created by the eventual privatization of the port.
The study said that the Greek shipping industry has weathered the storm and the Greek-owned fleet, with over than 5,272 vessels and a value approaching USD 86 billion, remains the largest in the world, in terms of tonnage capacity and has enhanced its dominant position in terms of value, in many of the sector’s segments.
0
Tags: Piraeus Port greece shipping hub
Visit Home
Send to friends
Print
Newsletter
Share this news