Two Nigerian maritime unions went on a brief "warning" strike on Tuesday over labor provisions in new federal legislation that would alter the existing Nigerian Ports Authority Act. Union leaders believe that if enacted, the National Assembly’s new Ports and Harbour Authority Bill would lead to job losses among their membership. 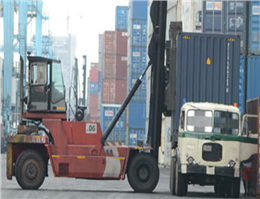 The protest was organized by the Maritime Workers Union of Nigeria (MWUN) and the ports branch of the Senior Staff Association of Communications, Transport and Corporations, MANA correspondent reported.
The unions had written to Nigeria's National Assembly to protest the measures, and they decided to strike when they got no response. The six-hour walkout reportedly delayed drayage operations at Lagos and Tin-Can ports.
Felix Akingboye, secretary general of MWUN, in an interview with local media said: “Harbour operations are a major revenue earner for the NPA and by extension, the federal government, without taking into consideration the security implications to the country and of course the job losses, as done during the concession exercise."
0
Tags: Strike worker Nigeria
Visit Home
Send to friends
Print
Newsletter
Share this news