Chinese and French companies are bidding to help Gambia build up its Atlantic port Banjul to be what industry sources say could be a rival to neighboring Senegal's Dakar. 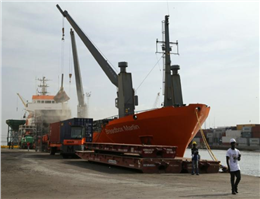 According to MANA, It would be one of the first major structural changes in Gambia following the end of President Yahya Jammeh's more than 20-year rule in January.
State-owned China Communications Construction Company (CCCC) (601800.SS) says one of its subsidiaries has made a bid for a 140 million euro ($159.91 million) contract Gambia has launched to redevelop the port.
France's Bollore Group (BOLL.PA) has also submitted an offer to develop the port for hundreds of millions of dollars, sources told Reuters, and was part of a recent delegation of French investors to the country.
The port was run by a state agency during Jammeh's rule. It is considered to have strategic potential thanks to its easy access to Atlantic shipping lanes.
China is also a major market for Gambia's exports, which globally are mainly peanuts, wood, cashews, fish and fruit.
Upgrading the port will take 30-36 months to complete, Tambedou said.
STRUGGLING
Gambia is poor. It ranks 173 out of 189 countries on the U.N. Human Development Index, below Haiti.
0
Tags: china france GAMBIA
Visit Home
Send to friends
Print
Newsletter
Share this news