COSCO Shipping Holdings has told its investors they can expect a USD272 million profit for the first half, turning around a USD1 billion loss recorded in the first six months of last year as the carrier benefits from rising container volume and freight rates. 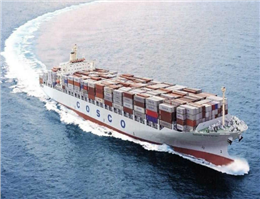 According to MANA, China’s biggest carrier said in a statement to the Hong Kong Exchange that improving operating conditions and a firmly recovering market were behind the positive profit alert. COSCO said its average freight rates in the container shipping business increased in the first half year over year with cargo volume growing by 34.72%, driving up profitability.
Maritime analyst Drewry said headhaul trades that were most important to carrier revenues were staging a broad recovery from the rock-bottom rate levels of last year and was expecting this to continue for the second half. With the extra pricing power gained by industry consolidation and the better supply-demand fundamentals, Drewry believes there is little likelihood of carriers returning to the profitability-destroying rate wars of early 2016.
The analyst said COSCO’s restructuring is believed to involve an internal re-organisation that is unrelated to OOCL while the COSCO Group’s overseas expansion efforts appear to be mainly focused on enlarging its global terminal footprint in support of the Chinese government’s Belt and Road initiative. On the container shipping side, immediate growth would come from COSCO massive newbuilding programme comprising 34 new ships of 9,000–20,000 teu, three of which have already been delivered this year, which will cost over USD4.2 billion in total.
0
Visit Home
Send to friends
Print
Newsletter
Share this news