NEWBUILDING prices in China have started to head south again amid volatile freight markets, following a short-lived rally earlier this year. This has cast a cloud of uncertainty over market prospects that had just shown a glimmer of optimism. 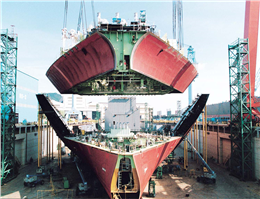 According to MANA, The China Newbuilding Price Index, which tracks ship prices at Chinese yards based on inputs from 19 member broking houses, dropped two points to 764 in June from the previous month. The monthly index had its first expansion over the past three years in April, then remained flat in May.
At the same time, however, news of more fresh deals have been swirling around the market, although some of the preliminary deals are said to have failed, or have yet to result in actual contracting activities.
“The messages sent out by the newbuilding sector are very mixed. A quiet market on the surface can be teeming with pulsing undercurrents,” said CNPI managing director Liu Xunliang.
Dry bulkers
The dry bulker sub-index, CNDPI, dropped marginally by one point to 768 in June, having experienced three consecutive months of growth between March and May.
Intermodal, a CNPI member broker, wrote in a note that the newbuilding prices seem to be “still running on the steam of the mini-ordering spree during the spring season”. Whether this trend can be sustained would be based on the performance of the freight market in the coming months, it added.
“Saying that, we do not think that there is much more upside to newbuilding prices as far as the remainder of the year is concerned.”
The price of a kamsarmax bore the brunt, falling 0.7% to $24.2m last month. The decline was in part affected by an order placed by Oldendorff at Hantong Ship Heavy Industry for a dry bulker at $23.5m, plus an option for one other, brokers said.
As for vessels of other sizes, the prices for handysize, ultramax and panamax vessels dropped roughly 0.4% to $19.9m, $22.7m and $23.6m, respectively, while capesize and newcastlemax edged up slightly to $42.3m and $44.8m.
The decline in prices is a reflection of the waning new ordering activities since May, which is a consequence of several causes combined, according to CNPI brokers.
Those causes include the recent correction in freight rates, lack of financing, uncertainties over new environmental regulations and top-tier shipyards’ refusal to build Tier II NOx emission compliant newbuildings. These factors have combined to quell shipowners’ buying appetites, said one CNPI member broker who asked to remain anonymous.
“Dry bulker-focused yards can now take it easy and enjoy their summer holidays.”
Results posted by shipyards appear to support the opinion of brokers. Yangzijiang Shipbuilding announced this week that it had won orders for six newbuildings worth $133m over the second quarter of this year, compared with 13 ships worth a total of $318m in the first quarter.
Tankers
CNTPI, the tanker index, slid two points from May to 823 last month, mainly dragged down by larger-sized vessels.
The price for a long range two tanker was down 0.2% to $41m, suezmax was down 0.6% to $52.2m and very large crude carrier was down 0.4% to $75.8m.
The value of LR2 is in line with the price for newbuilding orders placed by Trafigura at New Times Shipbuilding and Hyundai Mipo Dockyard. In June, the trading giant backed by China’s Bank of Communications Financial Leasing ordered 22 tankers, including suezmaxes, LR2s and products carriers at the two yards, plus options for another 10 vessels.
Under the contracts, the prices for medium range and long range one tankers rose by 0.4% and 0.3% to $31.9m and 36.2m, respectively.
Brokers said the fact that New Times managed to bag Trafigura orders brought some hope to Chinese builders, who have seen their South Korean competitors take most of the tanker newbuilding contracts this year.
Rumours are also circulating that China’s major state-backed owners are now in discussion with China State Shipbuilding Corp and China Shipbuilding Industry Corp about signing new tanker orders. These deals, if they materialise, would offer a big relief for the two shipbuilding conglomerates, said another CNPI broker.
Containerships
The containership index CNTPI fell four points to 789 in June.
The price for a 2,200 teu vessel slid 0.2% to $24.2m, while there was a deeper decline in the larger vessels sector. The prices for 4,800 teu and 9,000 teu vessels were down 0.6% to $42.5m and 0.8% to $78.9m, respectively.
SITC Brokerage, which focuses on feeder vessels, said some orders were now at the negotiation stage. It expected some deals to emerge in the second half of this year.
0
Tags: Shipbuilding china
Visit Home
Send to friends
Print
Newsletter
Share this news