As the world celebrated the UN official observance, ‘International Day of the seafarer’ on Sunday, (June 25), International Maritime Organization (IMO) Secretary General Kitack Lim stressed that ‘Seafarers matter!”, according recognition to the salient role and valuable contributions of seafarers from all over the world to the movement of trade and commerce via seas of continents and countries. 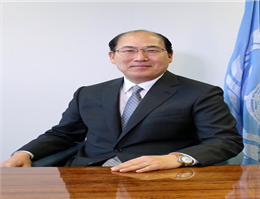 ‘We ask all of you and join us and say “Seafarers Matter! “ which is the event’s theme, and as collective standard and firm stand showing support and care to the world’s some 1.2 million to 1.5 million seafarers currently belonging to the world’s merchant marine fleet, MANA correspondent reported.
In a message direct from Duckdalben Seafarers’ Center In Hamburg, Germany, Sec-Gen Lim called on the general public, governments and major and all other stakeholders to support the event. Ship owners, managers, operators, flag state administrators, surveyors, assessors, maritime labor unions, and other maritime and mariners’ organizations are the top supporters.
In the same message, Mr. Lim said, with this year’s theme, “We want to particularly engage ports and seafarers’ centers to demonstrate how much seafarers matter to them. “We want to create a platform to give ports and seafarers’ centers the opportunity to demonstrate how much seafarers matter to them.
Special activities and other event were organized at ports, holding a public day at sefarers’ centers, and providing a whole day free-Wi-Fi service to seafarers and other maritime stakeholders on June 25.
Mr. Lim said that although seamanship provides a longtime and fulfilling career, mariners are also `faced with pressures by economic demand, and at times loneliness, being away from families and friends, which may cause stressed if self-control and discipline are not well maintained and guarded.
He added that seafarers could seek help of IMO in coordination with other concerned international bodies regarding problems like conditions, unpaid ages and even abandonment issues.
In the Philippines, most active groups in the celebration were the Associated Marine Officers’ and Seamen’s Union of the Philippines (AMOSUP) led by its president Dr. Conrdo F. Oca, the Maritime Industry Authority (MARINA) headed C/E Marcial Q. C. Amaro III ({PhD), Philippine Ports Authority (PPA) under GM Daniel Jay Santiago, Philippine Coast Guard (PCG) headed by its commandant Commodore Joel Garcia, shipping and manning firms, and other maritime stakeholders.
The ‘Day of the Seafarer’ was organized by IMO. It was established in a resolution adopted by the 2010 Diplomatic Conference in Manila to adopt the revised Standards of Training, Certification and Watckeeping (STCW} Convention and Code of 1978. Its purpose is to recognize the unique contributions made by the seafarers from all over the world to international trade, the world economy, and civil society as a whole.
0
Tags: IMO SEAFARER
Visit Home
Send to friends
Print
Newsletter
Share this news