the captain of a Turkish freighter said on Monday that the Greek coast guard had fired on his vessel after he refused an order to dock at a port on the Greek island of Rhodes. 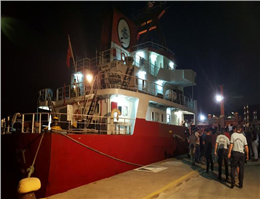 According to MANA, Turkey said the action was "disproportionate" and showed no regard for human life.
"There is no justification ... for firing on an unarmed commercial ship carrying freight between two Turkish ports," the Foreign Ministry said in a statement. "Our sole consolation is that nobody was killed or injured as a result of the incident."
Sami Kalkavan, captain of the M/V ACT, told the broadcaster CNN Turk that the Greek coast guard had ordered him to dock in Rhodes, which is some 15 miles (24 km) from the Turkish coast, for inspection. He said that when he had failed to comply, the coast guard had opened fire, putting 16 bullet holes in his ship.
The Greek coast guard said it had fired warning shots as it was trying to inspect the ship's cargo after receiving an anonymous call that it was carrying narcotics. The vessel did not cooperate and subsequently moved back to Turkish waters, it said in its statement.
0
Tags: greece turkey
Visit Home
Send to friends
Print
Newsletter
Share this news