A U.S. warship sailed near a disputed island in the South China Sea claimed by China, Taiwan and Vietnam on Sunday in an operation meant to challenge the competing claims of all three nations, a U.S. Defense Department official said. 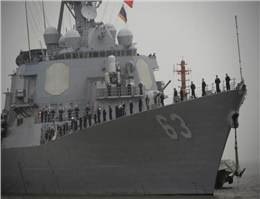 According to MANA, the USS Stethem, a guided-missile destroyer, sailed within 12 nautical miles of Triton Island, part of the Paracel Islands in the South China Sea, the official said.
The operation was first reported by Fox News on Sunday.
China's Ministry of Foreign Affairs said in a statement the U.S. ship had made an unauthorized entry into China's territorial waters.
The operation was a "serious political and military provocation," said the statement, issued late on Sunday, citing ministry spokesman Lu Kang. It said China had sent battle ships and fighter jets to warn off the Stethem.
Trump has heaped praise on Chinese President Xi Jinping, but his administration has also stepped up pressure on Beijing as he has become frustrated that China has not done more to pressure North Korea over its nuclear and missile programs.
On Thursday, the administration imposed sanctions on two Chinese citizens and a shipping company for helping North Korea's nuclear and missile programs.
0
Visit Home
Send to friends
Print
Newsletter
Share this news