The general governor of Sistan and Baluchestan Province announced the entrance of 25000-tons ship which carrying basic commodities from Tiland to Chabahar port. 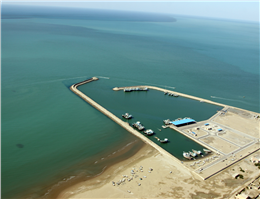 Ali Osat Hashemi referred to the special condition of Chabahar port in the first three months of this year and stated: in line with executing resistance economy, the government has dedicated special attention to Chabahar port.
Pointing out to that this port could play a major role in supplying the basic commodities of the country, he continued: accelerating the process of unloading , reducing the costs of imported goods ,facilitating transit process in Chabahar-Milk route and a boom in the country’s exports are among the main purpose of this port.
Hashemi added: in the first three months of this year, Chabahar port witnessed the embarkation and disembarkation of 9722 TEU, a figure which highlights 99 percent ascend in comparison with the same period in the last year.
0
Visit Home
Send to friends
Print
Newsletter
Share this news