Dry Bulk Charter Rates to Rise in Second Half 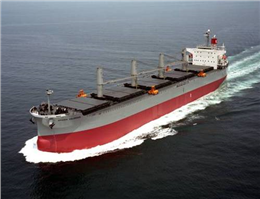 According to MANA, The independent research house attributed the recent weakness to slower demand due to high iron ore inventory levels in China. While clearing of stocks may continue into the second half, NRA Capital said that robust steel production and the lack of inventory in certain products such as rebar suggest that inventory destocking will likely be temporal.
Crude steel output grew to 4.8% year-on-year to 72.8m tonnes in April while that of hot rolled coil increased by 40% from a year earlier.
The research house also noted that capacity growth in the first half has been driven by fewer demolitions but highlighted that longer-term capacity growth as dictated by new vessels on order appears to be subdued.
Adding that the number of bulk carriers on order have halved from a year earlier, dropping from 490 to 257 vessels, NRA Capital said the cautious build-up in vessels indicates that operators remain wary of previous excess capacity, which should provide a floor to shipping rates.
Another factor that should support dry bulk shipping over the longer term is the heightened global infrastructure spending under China’s One Belt One Road policy, with some 900 projects worth $890bn are currently underway or planned.
While the opening of land routes under this initiative will pose competition to sea routes, the research house believes that dry bulk shipping will benefit from demand for resources such as iron ore for China’s production of goods such as steel to support construction in participating countries.
0
Tags: Bulker Freight Rate
Visit Home
Send to friends
Print
Newsletter
Share this news