Islamic Republic of Iran Shipping Line IRISL was admitted as a member in Classification Society Bureau Veritas (B.V), an event that was yet another honor accomplished after JCPOA’s execution 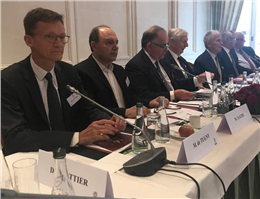 By official invitation of Chief Executive Officer of B.V, the director and head of the board at IRISL, Dr. Mohammad Saeedi, attended in periodical assembly of international council of classification societies, MANA correspondent reported, in the course of this assembly, IRISL was admitted as a member in B.V.
Elaborating on the capabilities and capacities of IRISL as well as exchanging ideas with owners and authorities in this assembly, Dr. Saeedi delved into the latest achievements in the field of Iranian banking relationship with international banks particularly European banks, which have paved the way for further trade between Iran and other countries.
He also added: given the undesirable condition of international shipping market, an increase in fuel costs with low sulphur as well as irrational and uneconomical limitations with regards to environmental standards, a lot of concern has been raised over the future of shipping market.
It is noteworthy to mention that thanks to the execution of JCPOA, IRISL is able to be present in international decision- making councils, which is a very critical and significant event.
0
Tags: IRISL Classification Society of B.V
Visit Home
Send to friends
Print
Newsletter
Share this news