The severing of diplomatic ties between Qatar and its neighbors in the Gulf has caught the market off guard, causing a lot of concern amid growing uncertainty surrounding the impact of the crisis on the shipping industry. 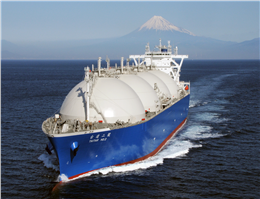 According to MANA, being the world’s biggest exporter of LNG, it was assumed that the LNG shipping sector would be affected the worst by the sanctions imposed on Qatari vessels following the diplomatic fallout. However, the impact on the sector has been muted, as majority of its cargo is not sold to its hostile neighbors but Asian countries such as India, China, South Korea and Japan.
As explained by Drewry’s LNG and LPG Shipping Analyst, Shresth Sharma, figures from 2016 show that around 66 pct of Qatari LNG was exported to Asian countries. Since the sanctions do not apply to this region there has been no major disruption on the trade route, and LNG shipping patterns haven’t experienced any major changes.
According to Sharma, having that in mind, there haven’t been any major fluctuations on the LNG market, and LNG prices are expected to remain immune to the ongoing situation. With respect to the Middle East, Sharma added that the region was not a big market for LNG with hardly 3.3 million tons of LNG imported from Qatar in 2016. Therefore, the market impact of UAE cutting its ties with Qatar is expected to be minimal. A similar scenario is predicted for relations with Egypt as the country doesn’t have any direct contact with Qatari exporters as it mainly imports through third parties such as Trafigura.
“It is mainly the European countries that will feel the impact of the Qatari crisis but that is also expected to be muted. The main impact will be represented in diverting of ships with Qatari cargo from the Suez Canal to the Cape of Good Hope,” he added.
Specifically, this means longer voyage time for Qatari cargo to reach their European customers.
Nevertheless, the situation seems to have given Asian buyers some leverage as they are likely to press Qatari producers for more liberal contract terms. Namely, the Japanese and now more recently the Indian government are asking for more flexible terms if they are to renew their long-term contracts for Qatari LNG, Sharma pointed out.
0
Visit Home
Send to friends
Print
Newsletter
Share this news