IRISL Seeks to Develop its Fleet

TOGY talks to Mohammad Saeidi, managing director and chairman of the board of Islamic Republic of Iran Shipping Lines (IRISL), about the company's expansion plans in the post-sanctions era. He gives an overview of Iran's key ports and bunkering infrastructure and plans for growth in this area. 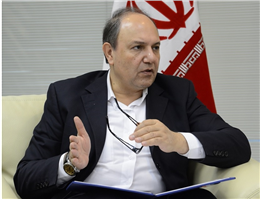 Has the lifting of sanctions changed IRISL's plans?
During sanctions, we couldn't develop our-selves and offer complete services. We could n't renovate our vessels without certain software and hardware. However, following the removal of the sanctions, we have a huge plan to increase and to develop our vessels.
Iranian companies need to export their products to Europe, and around the world to African and Asian countries. So we have to increase our vessels to provide sufficient services for that.
We have very good shipyards in Iran, but based on our requirements for mod-ernising our vessels, we have to order from foreign suppliers, at least for the next six to seven years.
We will focus on Southeast Asia [for vessel purchases]. The quality is good and the price is much more competitive than that of other producers.
In which sectors do you see growth in terms of the volume of exports?
We see this mostly in petrochemical products. We have a lot of capacity and many kinds of petrochemical products in Iran - urea, ammonia and many kinds of polymers. We know that many European factories and companies need Iranian petrochemicals.
What is the approximate value of Iranian petrochemicals exports made by IRISIL and where do they go?
Based on recent estimations, around USD 40 billion per year is exported to Asia and Europe. This will definitely be increased to approximately USD 60 billion over the next one or two years.
Our expansion projects are under construction and they will be operating in the next two years. One of our major priorities is purchasing LPG carriers, as well as carriers for chemical products. We already have vessels capable of transporting LPG.
Besides being able to export directly to Europe, are there any other changes that you have felt since Implementation Day in January?
We have started new lines from the Persian Gulf to ports in the north and south of Europe. By establishing such new lines, we will cover all of the European ports. In the north, Rotterdam and Hamburg would be the main ports, and we have recently exported some petrochemical products there. Genoa in Italy, Barcelona in Spain and Malta will be covered by our vessels.
New lines are being established from the Persian Gulf to Brazil and Argentina. The new route would be an international line for our company directly from an Asian port to the south of Africa from there to Latin America.
Another plan under consideration to be completed in the next four to five months would be establishing a new line from the Persian Gulf to Vancouver, Canada. The new approach by the Canadian government provides a positive atmosphere for trade and for starting business between Iranian and Canadian companies.
Which are Iran's most important logistics points for exports and imports?
Right now the major Iranian ports are the Shahid Rajaie port complex at Bandar Abbas, where a third terminal will be announced as an international tender by the Iranian Ports and Maritime Organization.
Beyond Shahid Rajaie, Imam Khomeini would be the other major Iranian port to handle any importing and exporting of bulk commodities.
In the future, we will have a good capacity at Chabahar, especially to connect Indian and Pakistani companies to Afghanistan and the Suez countries. That would be one of the major ports for the future and of course some of the specific countries such as India, Pakistan and China are interested in joining the project.
How do you assess Iran's infrastructure for bunkering and refuelling?
Bunkering would be one of the main targets for a business to develop inside of Iran and as an offshore project - even overseas. Having a good capacity for bunkering is strategic because we have a lot of refineries in Iran. IRISL is one of the major players in the bunkering business right now and we are anticipating developing this business both inside and outside of the country.
We have huge bunkering capacity and good facilities in Bandar Abbas and Qeshm Island, where the storage capacity is around 100,000 tonnes. We are interested in developing this business in Asian countries, especially in Singapore as a hub. We are looking to find the best partner in Europe.
0
Tags: Seek IRISL fleet development
Visit Home
Send to friends
Print
Newsletter
Share this news