Spanish Dockers to Stage A New Round of 48-hour Strikes

Cargo-handling at Spanish ports faces increasing disruption over the next three weeks after dock workers announced plans to stage a series of 48-hour strikes over proposed changes to Spain’s dock labour scheme. 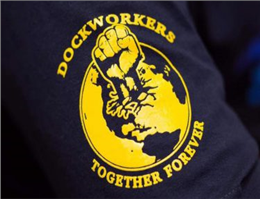 Reports from leading Spanish ports indicated that more than 40 vessels were diverted after the dockers called a first 48-hour strike on Wednesday and Thursday of this week, and that many other ships were left unattended in port, MANA correspondent reported.
The dockers had already given notice that they would stage 24-hour strikes on Monday, Wednesday, and Friday of next week but have now added a series of two-day strikes in the final week of this month and the first week in July.
These strikes will take place from 26 to 28 June, from 29 June to 1 July, from 3 to 5 July, and from 7 to 9 July.
The dockers want guaranteed employment security for the 6,150 workers employed at Spain’s 28 state-owned ports once a new EU-compliant dock labour scheme is introduced in line with legislation passed recently by parliament.
0
Tags: spain Dockworkers Union Strike
Visit Home
Send to friends
Print
Newsletter
Share this news