The vast majority of the world’s trade in goods is moved by sea, and it has long been recognised how shipping is a critical element of the global economy, providing the connection between producers and consumers all over the planet. 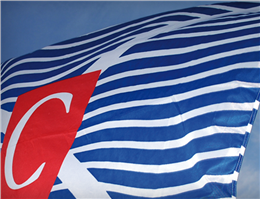 However, what is less frequently mentioned is the tremendous ‘value for money’ with which it does so; this is clearly worth a closer look, MANA correspondent reported.
Bargain Of The Century?
One US dollar doesn’t get you much in today’s world. On the basis of latest prices it would buy 0.025 grams of gold or 2% of a barrel of crude oil. Based on Walmart’s latest online pricing it would buy about half a litre of milk. That’s not a lot whichever way you look at it, in a world economy that is 75 trillion dollars large. But in shipping one dollar still gets you something very substantial. One way of looking at this is to take the movement of cargo in tonne-mile terms and divide it by the estimated value of the fleet. Here, to try to do this in like-for-like terms, the calculation includes crude and oil products, dry bulk, container and gas trade, and the ships that primarily carry those cargoes. On this basis, one dollar of ‘world fleet value’ at the start of May 2017 would have bought 110 tonne-miles in a year, based on 2017 trade projections. What an amazing bargain! One tonne of cargo moved more than 100 miles, per year, all for one little greenback!
What’s In A Number?
What drives this number? Well the essence of the value of course lies in the huge economies of scale generated by moving cargo by sea in vast quantities at one time over significant distances. The average haul of one tonne in the scope of the cargoes listed above is estimated at 5,016 miles and the average ship size at 58,706 dwt. Of course the amount of tonne-miles per dollar can vary over time, depending on changes in asset market conditions, the underlying cost and complexity of building ships and vessel productivity, speed and utilisation (rates of fleet and trade growth aren’t perfectly aligned most of the time). Across sectors the statistics can vary significantly too.
Buy In Bulk
One dollar of bulkcarrier and oil tanker tonnage accounts for 154 and 101 tonne-miles of trade per year respectively. For more complex, expensive ships the figure is lower: 20 for gas carriers. For boxships, despite their higher speed, the figure stands at 114. Vessel size (economies of scale in building) and cargo density (this analysis is in tonnes) play a role too in these relative statistics (which also don’t always capture the full range of cargo carried by each ship type).
Value For All Time
Nevertheless, whatever the precise numbers and changes over time, 110 tonne miles of trade each year for one dollar of asset expenditure just sounds like mighty good value at a time when a dollar doesn’t go very far. This underpins shipping’s ability to carry an estimated 84% of the world’s trade in tonnes and act as the glue holding the globalised economy together. Shipping’s famous volatility retains the ability to make and lose fortunes for asset players but the underlying economic contribution of each dollar invested may just be one of the greatest bargains of all time. 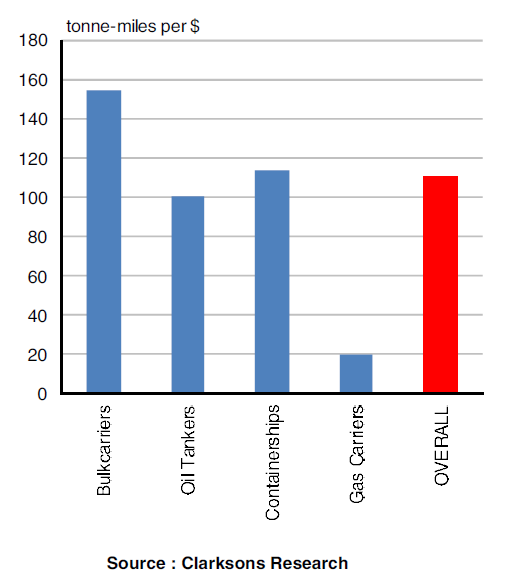