The car carrier Neptune Thelisis broke loose from her moorings and collided with a bulk cargo ship-to-shore gantry at the Port of Koper, Slovenia. 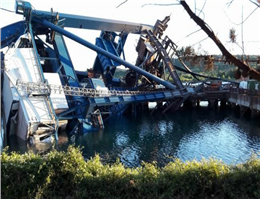 According to MANA, the gantry toppled over, resulting in at least $10-15 million in damage, but no injuries or fatalies were reported.
The port has two remaining bulk gantries, which will allow all operations at the terminal to continue until a replacement is delivered.
The accident appears to have been caused by severe winds, which reportedly caused the lines at the Thelisis' bow to part. Maritime authorities have launched an investigation and marine surveyors will examine the Thelisis for damage. The ro/ro was still moored at Koper as of Friday afternoon.
Local outlet Najdi suggests that authorities have warned of the risk of allision between vessels and the pierside gantries at Koper in the past, and that there have been two similar near-miss incidents, both involving ro/ros.
0
Tags: gantry crane koper
Visit Home
Send to friends
Print
Newsletter
Share this news