A new report by U.S.-based One Earth Future Foundation Inc.'s Oceans Beyond Piracy program found that seafaring incidents involving kidnap for ransom jumped in 2016. Asia led the way with 125 instances of piracy, while West Africa had 95.

Incidents of kidnap for ransom rose in West Africa and in Asia (in the Sulu and Celebes Seas specifically) from 2015 to 2016, MANA correspondent reported.
2016 saw a 57% rise in the number of seafarers affected by piracy in West Africa.
The total cost of counter-piracy operations in the Western Indian Ocean has steadied out at around $1.5 billion. Deterring piracy in West Africa remains a significant and persistent cost to both regional and international stakeholders.
OBP calculated that 2,283 seafarers were affected by piracy and armed robbery in Asia in 2016, down from 3,674 in 2015. Kidnap for ransom represented the most violent model in 2016, with 67 seafarers taken hostage in the Sulu and Celebes Seas, of which two were killed while in captivity. 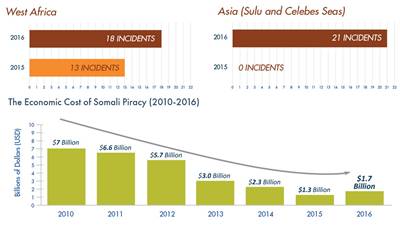