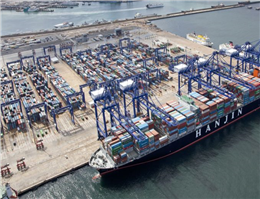 According to the representatives of the Coordinadora Estatal de Trabajadores del Mar (Coordinadora), a Spanish dockworkers union, almost 100 percent of workers supported the strike, MANA correspondent reported.
The workers are demanding that companies keep their employees and maintain the same working-conditions after the implementation of the port-reform.
Until now, the workers were hired through local stevedoring societies known as Sociedad Anonima de Gestion de Estibadores Portuarios (SAGEP). However, the new law would enable ports to hire non-unionized dockworkers instead of the unionized ones, potentially resulting in massive layoffs.
During today’s press conference, the union representatives said that, in their opinion, the main culprit for the ongoing situation is the government that put the companies in a privileged position.
At the moment, all dockworkers have an indefinite contract with their companies. Nevertheless, under the new regime, the companies would be given a choice to decide whether to keep them as employees or not.
During the recent talks between the union and Anesco, port employers’ association, the latter could not guarantee the security of 100 percent of those jobs, which prompted the stevedores to go ahead with their strike plans for this week.
The country’s ports could suffer considerable drop in traffic as shipping companies divert their cargo elsewhere due to strikes. Port statistics show that the port of Algeciras, the busiest in Spain, experienced a drop of 5.98 per cent in traffic so far in 2017.
Last week, Danish shipping major Maersk Line said that its latest fleet addition, the 20,568 TEU Madrid Maersk, would be omitting the port of Algeciras. Instead, the cargo would be discharged in Port Tangier for further connection to Algeciras.
Reacting to the announcement, the International Dockworkers Council (IDC) asked “that all IDC members be aware of ships that may be diverted from Spain, and to not work accept these ships in their ports.”
0
Tags: Strike 2017 spain Dockworkers Union
Visit Home
Send to friends
Print
Newsletter
Share this news