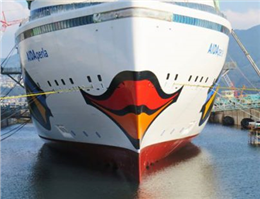 With over 5,000 Italian crew members currently employed on Carnival Corporation ships, the number of employment opportunities will almost double in number, according to MANA correspondent cited by Carnival.
Namely, for 2017, further growth is expected with official launch in June of AIDAperla, the new AIDA Cruises flagship, which made its first call today at Genoa.
AIDAperla will be deployed in the Mediterranean, calling at Civitavecchia/Rome and Livorno every week, with a total of 60 stopovers in Italy during 2017.
“Carnival Corporation is one of the biggest foreign investors in Italy, which is a strategic country for our growth,” said Arnold Donald, CEO of Carnival Corporation.
“Since 1990 we have built 68 ships in Italian shipyards for various brands in our group of 10 world-leading cruise lines, and another 10 vessels are currently on order or under construction, for a total investment of about EUR 32 billion.”
The Costa Group today also announced that its fleet carried about 3 million guests in 2016, an increase of 13 percent from 2015. In addition, it expects a further increase in 2017, with the launch of AIDAperla.
0
Tags: cruise 2017 carnival
Visit Home
Send to friends
Print
Newsletter
Share this news