HANDYSIZE bulker earnings have taken another plunge on the Baltic Exchange over the past week, with the weighted time charter average falling to $6,833 per day on Friday, down 6% over the week. 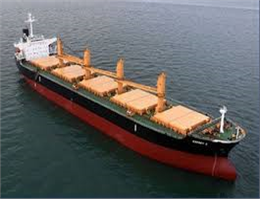 According to MANA, The corresponding index dropped to 469 points from 502 on May 19, weighed down by a lack of fresh cargoes in the market.
“Chinese imports and exports were reduced drastically, which caused freight rates to lessen further and shipowners were thunderstruck and left without strength to fight back,” Gulf Maritime brokers said.
Meanwhile, the oversupply of tonnage in Black Sea and Mediterranean areas added to the burden on shipowners, which caused extra drainage for freight levels, the brokerage added in its weekly report.
The HS1 Skaw-Passero to Rio de Janeiro-Recalada and HS2 Skaw-Passero to Boston-Galveston trips were the hardest hit, dropping by 14.4% to $5,700 per day and by 11.6% to $5,917 per day respectively.
“Rates have been coming down steadily for the past days. We expect more of the same through the beginning of this week due to holidays in China,” said a Singapore-based broker. The Dragon Boat Festival holidays in China stretch over May 28 to May 30.
Four spot trades were reported in the week — the highest being at $14,000 per day from US Gulf to west coast central America, and second-highest at $12,7500 per day to Peru, according to Clarksons data.
In the secondhand market, the 2005-built Acacia Bulker was sold for $7.3m, according to VesselsValue, while the 2007-built New Dynamic changed hands at $9.2m.
0
Tags: Handysize earnings demand ebbs soften
Visit Home
Send to friends
Print
Newsletter
Share this news