THE movement towards consolidation in the container sector is not yet over and will have a dramatic effect on smaller operators and terminals, according to SeaIntelligence chief executive Lars Jensen. 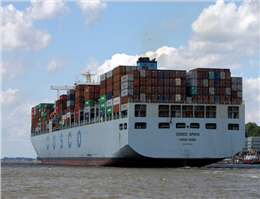 “I remember saying we would go to six to eight global carriers at a time when we had 20,” Mr Jensen told the Global Liner Shipping conference in Hamburg last week, MANA correspondent reported.
“We’re now down to 11 or 12, depending on how you count them, so we are not there yet.”
Six to eight was not a random number, he said.
“When you compare liner shipping to other commoditised industries — and liner shipping is becoming a commoditised industry — you need a certain degree of consolidation for that industry to become stable.”
Other commoditised industries had been driven in that direction over time, and that predicated the number liner shipping would get down to.
A year ago it would have been difficult to pinpoint who would be the next contender for consolidation, he said, but that had now become more apparent.
Super carriers
“We have seen the emergence of six or seven super carriers. Then there is a small group of carriers that are still global but are too small to compete with the scale of the super carriers.”
There were also a large number of niche carriers, and further consolidation would take place among these.
“There will also be consolidation of feeder operators. The industry needs large feeders in Europe, Asia and the Caribbean. That is not from the size of the ships but from the spread of the network.”
Niche carriers would have their place, but only if they remained small. “If they are too large, there is not enough niche cargo,” Mr Jensen said.
Increasing transparency would make niche carrier survival even harder, Mr Jensen said.
“Anyone outside the main global carriers trying to fight on scale must ask themselves what would happen to their value proposition as a niche carrier when, not if, the market becomes fully transparent.”
Prices would become fully transparent and it would become easy to compare profits.
Digitalisation would also make life harder.
“The main carriers are spending hundreds of millions of dollars on it from a huge balance sheet, but it will be disproportionately expensive for a small carrier to follow this path,” Mr Jensen said.
Niche casualties
A major battle was already heating up, with far too much capacity for the niche carriers, and this could lead to casualties.
“Whereas the large lines tend not to go bankrupt, it does happen at times for niche carriers,” Mr Jensen said. “This consolidation among the niche carriers that will play out over the next few years will actually lead to bankruptcies.”
There would also be an impact on ports and terminals as carriers became more adept at designing their networks.
“Right now the networks of the three main alliances are clearly not optimal and seem to more the result of a compromise between the different parties based on needing a network that is okay and is one that all parties can agree on,” he said.
Double impact
With the huge scope for improvements in reducing the cost of operations on those networks, there would be two impacts.
“Firstly, over time, we will see fewer transhipment hubs,” Mr Jensen said. “When we run the analytics, it always favours fewer, larger transhipment hubs.”
Terminals were gearing up today to handle big ships to stay competitive, but only some of them would be successful. “This is going to be a dangerous game for the terminals,” Mr Jensen said.
The second impact would be direct port calls.
“When you look at the alliances, frequency of services is a scale advantage that is equally important as the size of ships,” Mr Jensen said. “With increased frequency comes the ability to cover more port pairs directly.”
Going directly from port to port saved on transhipment costs and feedering.
“This is how the networks will gradually evolve,” he said. “Even before the new alliances there were an increasing number of vessel sharing agreements across the alliances. We are now seeing the first vessel sharing agreements across the new alliances. These are always focused on exactly the same thing: how can we go more direct with less transhipment?”
For the terminals, the future would see transhipment business gradually declining.
“There will still be lots of transhipment but you can easily see the future where the number of containers handled in a port will grow more slowly than the number of containers transported.”
0
Tags: merger alliance terminal operator container lines carrier
Visit Home
Send to friends
Print
Newsletter
Share this news