Over 30 Migrants Drown off Libya

More than 30 migrants, mostly toddlers, drowned on Wednesday when about 200 people without life jackets fell from a boat into the sea off the Libyan coast before they could be hauled into waiting rescue boats. 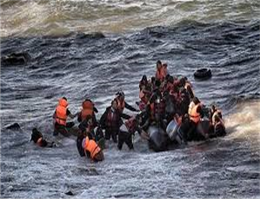 According to MANA, rescue group MOAS, which operates in the Mediterranean, said its staff were pulling bodies out of the water. "Most are toddlers," co-founder Chris Catrambone said on Twitter.
A total of 34 dead bodies were found in the water, and around 1,800 people rescued from four rubber dinghies and six wooden boats, the coastguard said later in a statement.
British and Spanish navy ships, aid group Doctors Without Borders (MSF), three merchant ships and a tug boat joined MOAS and the Italian coast guard and navy to carry out the rescues.
More than 1,300 people have died this year on the world's most dangerous crossing for migrants, after boarding flimsy boats to flee poverty and war across Africa and the Middle East.
Last Friday, more than 150 disappeared at sea, the International Organization for Migration (IOM) said on Tuesday, citing testimony collected after survivors disembarked in Italy.
More than 50,000 migrants have been rescued at sea and brought to Italy so far this year, a 46 percent increase on the same period of last year, the Interior Ministry said this week.
0
Tags: drown Libya Migrants
Visit Home
Send to friends
Print
Newsletter
Share this news