Container shipping line CMA CGM posted higher first-quarter profits, helped by a turnaround at recently acquired NOL, and gave an upbeat assessment for the current quarter in another sign that the shipping industry is emerging from a slump. 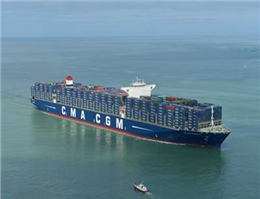 The French-based group reported on Friday a first-quarter net profit, including Singapore-based NOL which it consolidated in June last year, of $86 million compared with a $100 million loss in the same period of 2016,MANA correspondent reported.
This was also above the $45 million net profit it recorded in the previous quarter when the privately held firm returned to profit after heavy losses earlier in 2016 during a severe downturn in container shipping.
Vessel overcapacity and tepid economic growth have eroded freight rates in recent years, contributing to the collapse of South Korea's Hanjin Shipping in 2016 and triggering consolidation moves, including CMA CGM's $2.4 billion takeover of NOL.
Market leader Maersk Line and German rival Hapag-Lloyd reported first-quarter losses last week but each pointed to improving demand that was expected to boost earnings in the rest of the year.
CMA CGM, the world's third-largest container line, said in its results statement that it was confident operating profits would rise further in the current quarter, citing healthy volumes and a "continued improvement in freight rates".
The family-owned group's core earnings before interest and tax (EBIT) reached $252 million, up from $3 million a year earlier and $193 million in the previous quarter. The group EBIT margin rose to 5.5 percent from 4.2 percent in the prior quarter.
Group sales rose 35.9 percent from the year-earlier period to $4.62 billion. Volumes increased by 34.2 percent overall, reflecting a focus on profitable growth, CMA CGM said.
CMA CGM is aiming to reduce its overall costs by $1 billion in an 18-month plan that runs to the end of 2017, and has also pledged significant synergies from the integration of NOL.
0
Tags: container shipping profit france CMA CGM فرانسه 2017
Visit Home
Send to friends
Print
Newsletter
Share this news